Collaborations are accounted for and worked along with. But the rest of the Books just seem to happen

What it is, is a close two-way collaboration in each book, the work of two or more artists responding to each others work in matter – employing made & found images, photography, drawings of installations & installations of photographs. The books employ copy and they employ paste. They employ ink and they employ the PROCESS, tension, violence and movement.

What it is in the immaterial world calls for nice and far-fetched parallels, like any good academic art read holds – with the surely well meant objective of bringing the experience and explanations closer, often ironically removing it from the very core of personal involvement and understanding. The artistic lineage in The Books Happen, the psychological substance, the emptied temporal set of the ‘now’ are not what you see, it is what you might presume.

Each book is a performance that has taken place. You weren’t there when it happened. But you can look and you can touch. Pardon my freedom, by continuing reading, you agree with my terms. I take the liberty of adopting this very nature of the non-linear and associative description of the undiscribed.

Allow me to abandon that. All that is a fairytale: it’s packed with fabulous morals but it’s the mere the hope of of the existence of Truth that drives us to repeat it. Not vital to development,

but it sure is a nice read.
Maybe, in this project, there’s more space for concept on each inch of the page, where traditional two-dimensionality is departed from by the external conceptual forces that two artistic sledge hammers bring about. It’s not just you and the books. It’s the process of the conception itself that pulls the strings.

It’s the new entity that people sometimes describe when talking about the theory of relationships. One and one is three. Love and hate curate insanity. It’s true. Flip the fuck over, your ass will be mine on the next page.

We know the Artist Book to be quite the exception to any kind of linear narrative, and it should be in this light that we open Overbeek’s book series. BUT that doesn’t mean there is no narrating or story telling within the books.
The important difference naturally, is that we’re reading a visual dialogue, the reflection of a one-on-one battle. That we may open the books that have happened rather than have the objects collect dust in the dark attics of collections. That we re-interpret the word of the ‘cover’ as a physical container of substance and not as the edge that —close and to cover the pages and remove them from reality.

This was the intention of this text:

The dynamics – both on the pages and beyond – are possibly not always fluid. But that’s the point.

Perhaps not so much for ill-mannered customs, but it sure applies to art. It is where the magic happens.

Flipping through the Books That Have Happened, it makes all the more sense. They underscore that the potential narratives of art are not the critic’s game, rather, the narratives float within the dynamics of the artist’s game. I’m not suggesting that works and gestures on the pages talk to each other, or that they radiate a palpable power ONTO us – the viewer, who has long ago accepted the challenge of art by continuing reading. We have checked the little box – ‘yes, I have read the terms of agreement, I accept the all your conditions, now let me in’

As compelling art is often unsettling, un-comforting and uneasy, I beg you to stop thinking that artists have the best intentions for your feelings. Moreover, they often strategically undermine your expectations and deny you the satisfaction of supposed beauty, of understanding and of Truth.

However. The part where you, the viewer are entering this mysterious world of Art, it should be like the very first time you fuck – Lawrence Weiner knows how to put these things way better than me. Nobody tells you how to do it, and it might be sloppy and messy at first. But you are entering this whole new world, and you know that you will personally own it very soon. Much unlike the general conception of the experience of art, this is not about understanding.

The thing that I plea for is that we are, in the best case participants to the game, with our own autonomous minds and presence. In the worst case, we miss the point that destabilizing meaning is not an intellectual death threat and we move along.

The Books do Happen. Not so much as an ‘evolution’ of the fit. Survival is for times of war and war is destined to produce losers. Nonetheless, these books are close collaborations that do invoke the type of battle that you could witness or smell.
The results are as attractive as they are strong. It’s important to ponder the role that CHANCE actually plays in the making of the pages. Overbeek removes his personal control over the process and gives away his work, the first version of the book, that for all he knows could be returned to him drenched in urine, shot, painted over or simply not returned at all when a natural disaster strikes the physical journey of the book.

The medium of collage owes a great deal of its emancipation as a full-grown autonomous art piece that can take care of itself, to Dada. It is no coincidence that the artistic submission to chance over LOGIC and narrative, let alone the goal of undermining separate artistic egos, forms such an important shift within visual arts in the twentieth century.

A celebration of failure and submitting your work to it is more than just a strategy.

Tension grows as more opponents are challenged by Overbeek.

The basis of the series reminds me of being witness to a Spanish bull fighting game.

The bull is represented by Darlings. Big, fierce, well-built, yes.

The darlings are being slaughtered in the arena of the book.

The matadors are not the unfair human team against one weakened overpowered animal, but they are TWO worthy opponents, and slightly less well-dressed. Tables turn with each turn of the page and more interventions are piling up, naturally, forced, interrupted, highlighted and sealed.

Appropriate the visual language of the other and make it sound like the echo of your own work.

So I admit, this is far fetched and the books are more unlike bull fighting than they resemble it, but since you agreed with my terms I will let you in on the sincere frictioned, torn beauty of this memory that drew this parallel. It is the unexpected intimacy and sentiment to the game. The dance, the grace and the violence of the unnatural situation – all with which the two artists collide and respond to each other within this Book, that happened.

Once art has been read, it cannot be unread.

And not one page will make you want to. 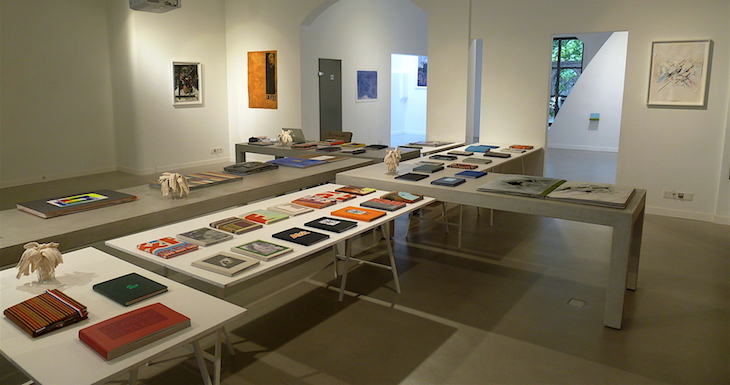